skip to main | skip to sidebar

Off Broadway: Fly Me to the Moon 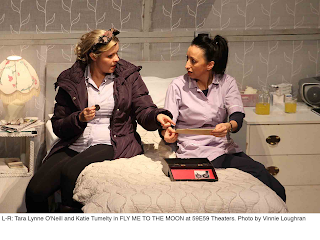 A little more than a decade ago, when we first saw Marie Jones’ best known and multiple award-winning work, Stones in His Pockets, in its London debut, we realized that we had come upon a remarkably talented playwright with an exceptional gift for dialogue.  And so it was that we eagerly anticipated seeing her latest work, Fly Me to the Moon, in its New York premiere as part of 1st Irish at 59E59 Theaters.
Well, we’ve seen it and the good news is that Fly Me to the Moon does confirm Ms Jones’ considerable talent.  The play is well constructed and sharply written.  And there is more good news: the two actors, Tara Lynne O’Neill (as Loretta Mackey) and Katie Tumelty as (Frances Shields) are supremely talented in their own rights, both delivering wonderful comedic performances as two care workers looking after Davy, a wheelchair-bound octogenarian , unable to speak and paralyzed on one side as the result of a stroke.  And the bottom line (of the good news, that is) is that the play does provide one with an hour and forty minutes’ worth of genial entertainment.
But, sadly, there is some bad news too: this play is not anywhere near as good as Stones in His Pockets.  The plot of Fly Me to the Moon is little more than a minor variation on a hackneyed Grade B movie theme.  Davy, whose only real passions were Frank Sinatra and playing the horses, dies as the play begins (we never actually do get to meet him) and Loretta and Frances are presented with an opportunity to steal his racetrack winnings and last pension check.  Loretta and Frances are basically decent women but they live hardscrabble minimum wage lives and they succumb to temptation.  Who, after all, will be hurt and who is to know?  Certainly not Davy – he’s dead.  His bookmaker – who cares about him?  And the Government – don’t make me laugh.  But as plots of this sort always do, one thing leads (or rather descends) to another and Loretta and Frances find themselves sliding down a slippery slope toward self-destruction.
Here’s where I’d normally be issuing a “spoiler alert,” before saying much more about the play’s plot – if there was much more to say.  But there isn’t and there’s the rub: the play’s resolution involves some half-hearted attempts to come up with some creative O’Henry-ish twists but to no avail.  There are no truly unanticipated surprises and so the real bottom line is that despite some clever dialogue, excellent acting, and amusing moments, the play turns out to be a disappointment.  Or maybe, having seen Stones in His Pockets, my expectations for Fly Me to the Moon were simply too high.
Posted by Alan Miller at 7:38 AM

Alan Miller
I’m a husband (happily married to the same woman for 50 years), the proud father of two terrific kids, and the super-proud grandfather of four even more terrific grandchildren. I’m a retired Wall Street senior executive (and, no, we’re not all greedy monsters) and the author of two books on finance. I’ve also taught courses in finance around the world (in the US, Indonesia, Russia and Malaysia). My political inclinations are decidedly libertarian and my philosophical leanings are well within the analytic tradition. I love books, theatre, fine food and wine, travel, politics, philosophy and economics – not necessarily in that order – and I enjoy talking about those subjects and writing about them. And now that I’m comfortably retired, I find myself in the fortunate position of being able to indulge at least two of those passions - theatre and travel - in this blog by commenting on the shows I’ve seen and the trips I’ve taken (with occasional forays into other areas).

Some Other Interesting Sites